This research aimed to determine the level of English language mastery and improvement of group Aat RA Terpadu An-Nisa’ by using flash card that has not been previously used in that school. The method used in this research is Classroom Action Research, in which in the process there are four repeating cycles, they are preparation/planning, implementation, observation and reflection. In doing so, the researcher does not work by herself, but in collaboration with classroom teacher of group A. The data of this research is the mastery of English vocabulary, where the process of data collection wascarried out by observation, interviews, and documentation. The subjects were students of group A at RATerpadu An-Nisa'. This research was conducted in two cycles, in which the results showed that there is an increasing of English vocabulary mastery with flash card as its media. In the pre-cycle observation showed that the percentage of children scoring average was 47.07%. Then, in the first cycle with the use of flash cards, the obtained scoring percentage was 61.83%, with an increase of 14.76%. In the next assessment cycle on the students reached an average score of 87.5%, with an increase of 25.67% from the previous cycle. Thus, it can be said that the use of flash cards in English language learning at RA TerpaduAn-Nisa’ is suitable for use as an effort to increase vocabulary, especially in group A.

Most read articles by the same author(s) 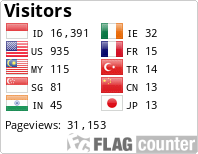